A redesign of the VW inventory shopping tool. 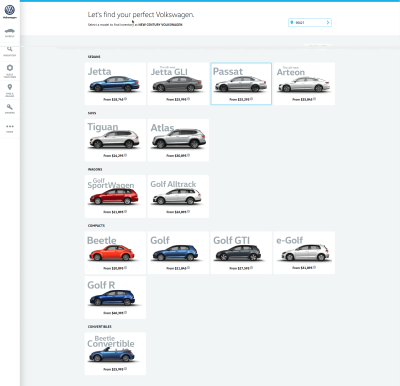 Shopping tools. They seem so simple. They aren't. Definitely not. This site was originally a low cost rebuild of one of the main shopping tools on VW.com, inventory. It's so much more than that, as it inherited the goals of the VW NGA rebuild. Our intention was to rebuild VW.com as a fully testable architecture utilizing a highly testable front end, ReactJS.

This project took about 3 months to complete. In it we had to rebuild many things that were already built and working on VW.com such as forms, navigation, and build tools. In the end we got it done, as we do.

The site could serve as a modern rebuild of VW.com and provides a path for them to move into more modern web development standards.

For this site I architected the front end build tooling, structure, and data management. We built processes to inline React components as drop in AEM components on the site.

It taught me a lot, and took some blood sweat and tears as they say.